City born and bred, Hart Stewart possesses the gift of psychometry—the psychic ability to discover facts about an event or person by touching inanimate objects associated with them. Since his mother’s death, seventeen-year-old Hart has endured homelessness, and has learned ways to keep his illiteracy under wraps. He eventually learns of a great-aunt living in Fairy Falls, and decides to leave the only life he’s ever known for an uncertain future.

Diana MacGregor lives in Fairy Falls. Her mother was a victim of a senseless murder. Only Diana’s unanswered questions and her grief keeps her going, until Hart finds her mother’s lost ring and becomes a witness to her murder.

Through Hart’s psychic power, Diana gains hope for justice. Their investigation leads them into the corrupt world threatening Fairy Falls. To secure the town’s future, Hart and Diana must join forces to uncover the shocking truth, or they risk losing the true essence of Fairy Falls forever. 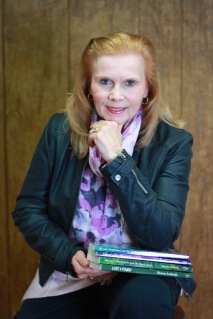 Sharon Ledwith is the author of the middle-grade/YA time travel series, THE LAST TIMEKEEPERS, and the teen psychic mystery series, MYSTERIOUS TALES FROM FAIRY FALLS. When not writing, researching, or revising, she enjoys reading, exercising, anything arcane, and an occasional dram of scotch. Sharon lives a serene, yet busy life in a southern tourist region of Ontario, Canada, with her hubby, one spoiled yellow Labrador and a moody calico cat.

Learn more about Sharon Ledwith on her website and blog. Stay connected on Facebook and Twitter,Goodreads, and Smashwords. Look up her Amazon Author page for a list of current books. Be sure to check out THE LAST TIMEKEEPERS TIME TRAVEL SERIES Facebook page.

My Tweets
Join 1,709 other followers