I can’t believe it’s been a year since my then five-year-old grandson proudly presented me with a Mother’s Day gift that he’d picked out himself: a miniature rose bush in a sparkly pink pot. The roses, all no bigger than a quarter, were sunshine yellow. I waited until Memorial Day (the safe time to plant in Massachusetts!) and transferred Eddie’s tiny rosebush into a planter on the front steps.

Oh, how that plant has flourished! It stayed covered with blooms all summer. Whenever life got too busy or the August sun burned a bit too hot on the little plant, Eddie would find me wherever I was and tug on my sleeve.

“Grandma, our rose looks like it needs water. We don’t want it to die.”

Indeed, we did not.

By summer’s end, the rose had doubled in size. Brown fall leaves formed a nest around the pot and nestled within its branches. Then life got even crazier, my son’s wedding was upon us, and time sped up. The first frost hit early and without warning. I stepped out the front door one morning and thought, “Oh no. I’ve killed Eddie’s rosebush.”

That afternoon, with the help of my very strong and newly married son, we carried the pot through the house to our sunroom. But the leaves were all gone. The stems were brown and brittle. I sadly studied the dead-looking branches and thought, “I goofed up. I was too late.”

But I continued to water and feed the twiggy thing and gave it a good haircut. When the first green shoots began peeking up from its base, a spark of hope stirred. That was in November of 2018, just six months ago. Around the end of January, a bud appeared reaching toward the rays of the cold winter sun.

I had beautiful blooms in the dead of winter. I can’t believe how much the plant has grown, trying desperately to keep pace with the little boy who so lovingly adopted it.

And this year, on Mother’s Day, I was presented by another rose bush from my future-gardener grandson. This one is pink J

My first foray into the world of gardening happened when I was about eight years old. I found a discarded vegetable bin from our old refrigerator and thought, “I can plant something in this!” What possessed me to choose a packet of radish seeds, I’ll never know.

But I planted them, and watered them, and thrilled to see the tiny green shoots emerge. In only a month, I was harvesting shiny, red globes, and my mom was using them in salads, leafy tops and all. My father raved that they were the most delicious radishes he’d ever tasted. I even learned to like them. I still do.

My writing is like that sometimes. It all starts with a tiny seed of an idea, and often I have to wait awhile. Sometimes a long while. Nurture the idea, allow it to take root and grow. My most recent Haunted Voices novel was like that. The antebellum home featured in the book was one I visited over ten years ago. Then one night I had a dream about that very house, and there was the ghost of a Confederate soldier pounding on the door.

Civil Hearts was born. You can buy it here on Amazon and in all other digital formats here. It’s coming soon in audiobook on Audible! 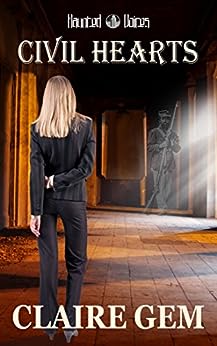 A widow with no family, web designer Liv Larson yearns for big change. After all, she can work from anywhere, right? Why not throw a dart at the map? She heads out of the big city for the rural South and falls in love as soon as she arrives—with the Belle Bride, an abandoned antebellum mansion.

Heath Barrow loves his country life, managing his antiques store in sleepy Camellia. But he’s lonely, and his condition—epilepsy—makes life uncertain. It’s already cost him a marriage. A new medication and the new girl in town have his heart hopeful again.

Sparks fly between Heath and Liv. But his first seizure sends Liv into a tailspin. Its mimics those her husband suffered before he died . . .

To make matters worse, Liv discovers she’s not living alone. Her challenge? Dealing with a Confederate soldier, one who clearly resents his Yankee roommate—even though he’s been dead for over a hundred and fifty years.

Disclaimer to readers of sweet romance: This book contains open door love scenes. It also has a give-you-chills super ghost story for those who love a good haunting. (I know, because I read it. Catherine Castle)