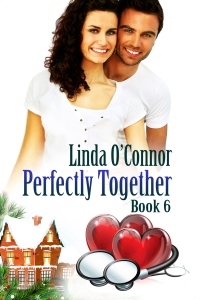 Today on Wednesday Writers I have guest author Linda O’Connor who will be talking about her latest contemporary romantic comedy, Perfectly Together, book number 6 in the Perfectly series. She also has an excerpt for your reading pleasure. Linda, tell us about one of the challenges of writing this book, aside from solving the problem of the heroine putting down roots and the hero reaching for the sky, as your hook says.

I’m very excited to release Book 6 in the Perfectly series, Perfectly Together. I wrote Perfectly Together as the final book in the series. But I also said that after the third book, haha, so we’ll see if it sticks. I really enjoyed writing this book because I had a number of characters from the other books “pop” in. The challenge was to do that without making it contrived. Eight of the twelve main characters are doctors – so that made it a bit easier. They meet at medical functions, share patients, or become the patient – one of the doctors is an obstetrician and one is pregnant! Altogether, the six books take place in three different settings – one larger city and two smaller northern Ontario towns. So I also incorporated the three towns into Book 6. It may sound like a bit much, but the two smaller towns are close together, which made it easier for Jayden and Cole in Perfectly Together to visit and work in both. All of the books in the series are stand-alone stories, but I hope Perfectly Together ties the other books (perfectly :D) together and gives readers a glimpse into what the characters are doing now. It’s like an insider secret – readers of the whole series can have fun with that additional layer!

Newly graduated naturopathic doctor Jayden Locke has a dream – start a practice in small-town Emerson and never move again. She’s found the perfect office building to buy. It passes an inspection, design plans are drawn up, and the bank okays the loan. Only one problem.

Dr. Cole Cameron scoops it before she has a chance to submit an offer. What?

It’s a good investment. Cole isn’t interested in settling down. He works three jobs in three different towns and would just as soon keep moving. But something about Jayden’s defiant eyes and sexy smile makes him pause and reconsider.

What are the chances that a heart filled with wanderlust and a soul longing for a home fit Perfectly Together?

Excerpt from Perfectly Together:

The weight of disappointment settled on her shoulders and an ache filled her chest. Her dream tumbled like a collapsing house of cards. She couldn’t bear it, and turned to go.

“Wait, maybe we could work something out.”

His eyes lit up and the green flecks glowed. “I planned on renting it out. We can renovate the interior to suit. Sounds like it would work out perfectly.”

For you, maybe. She longed to own. The thought of renting, of living at the whim of someone else, made her stomach twist in knots. She couldn’t do it. She wanted stability and needed permanency.

She blinked back tears. It had been so close.

“You’re thinking of a clinic? Are you a doctor?” he asked.

Cole’s eyes widened and he smirked. “A naturopath? Interesting. What exactly do you do? Hand out herbs? Read a crystal ball?” He grinned. “Voodoo?”

Jayden put her hands on her hips. “Naturopaths follow the same curriculum as medical doctors and then get additional training in natural medicine,” she said stiffly.

She narrowed her eyes. Was he mocking her? “I don’t think renting would work. I was really looking to buy.” She couldn’t keep the disappointment from her voice. “Good luck to you, though.” She glanced around one last time and walked to the front door.

A hand on her arm stopped her. “Take my card,” Cole said, offering it to her. “Think about it. If you change your mind, give me a call. I’m hoping to get underway in the next couple of weeks.” He tilted his head, the green flecks twinkling. “You know, you don’t look like a naturopath.”

Pft. She rolled her eyes. Should she even bother taking his card? She glanced at the open expanse out the window, the sunlight streaming in, and the view of the mountain.

Would it be worth it? Her dream property, at what cost?

He raised his eyebrows, and her heart stumbled at the interest in his dark blue eyes, the green specks mocking her with a dare.

She plucked the card out of his hand. Hopefully it had a picture on it. It might be a useful target for dart practice.

Want to read more? You can get Perfectly Together at Amazon:

Linda O’Connor started writing a few years ago when she needed a creative outlet other than subtly rearranging the displays at the local home décor store. It turns out she loves writing romantic comedies and has a few more stories to tell. When not writing, she’s a physician at an Urgent Care Clinic (well, even when she is writing she’s a physician, and it shows up in her stories 😀 ). She hangs out at www.lindaoconnor.net.

Laugh every day. Love every minute.