When I first heard the word moodling at a writing workshop, my thoughts gravitated toward zucchini noodles. A bit off base, but considering it was close to lunchtime, I assumed there might be some connection.

The facilitator quickly put an end to that line of thinking. A long-winded explanation followed with brief mentions of famous moodlers such as Isaac Newton, Napoleon Bonaparte, and Albert Einstein.

Intrigued, I decided to do my own research. Here’s what I discovered:

Moodling is primarily a solitary activity. You won’t find any university or college courses devoted to moodling. Nor will you find it in the Pocket Oxford English Dictionary (2013 edition).

In her book, If You Want to Write (1938), Brenda Ueland offers the following description:

Euland then goes on to say, “What you write today is the result of some span of idling yesterday, some fairly long period of protection from talking and busyness.”

Moodling worked for Isaac Newton when he sat under an apple tree in Woolsthorpe, England, circa 1666. While wondering why the moon didn’t obey the principle of centrifugal force and fly off into space, an apple fell upon him. Newton moodled and formulated his theory.

After the breakup of his marriage, Albert Einstein spent undisturbed days and nights in the quiet solitude of his Berlin apartment, following his mathematical hunches. This intense period allowed Einstein to finalize the general theory of relativity.

Sitting under a tree, lying on a beach, strolling in a park, soaking in a bathtub, listening to classical music, lingering in bed…these are ideal “moodling” environments. Give yourself permission to daydream and reflect without too many expectations. And don’t be disappointed if a spark or epiphany doesn’t emerge quickly.

If you prefer a more structured approach to moodling, follow the method suggested by Eric Grunwald, a lecturer in MIT’s Department of Global Studies and Languages. (https://writingprocess.mit.edu/process/step-1-generate-ideas/instructions/moodling):

Set aside an hour or more.

Joanne is offering a free ebook of No More Secrets on the following dates: Monday, June 7 to Thursday, June 10.  So if you find her blurb intriguing head on over to Amazon on one of the above dates and download No More Secrets.

Angelica Delfino takes a special interest in the lives of her three nieces, whom she affectionately calls the daughters of her heart. Sensing that each woman is harboring a troubling, possibly even toxic secret, Angelica decides to share her secrets—secrets she had planned to take to the grave. Spellbound, the nieces listen as Angelica travels back six decades to reveal an incredulous tale of forbidden love, tragic loss, and reinvention. It is the classic immigrant story upended: an Italian widow’s transformative journey amid the most unlikely of circumstances.

Inspired by Angelica’s example, the younger women share their “First World” problems and, in the process, set themselves free.

But one heartbreaking secret remains untold…

Ebook for No More Secrets is free on Amazon – June 7 to June 10!

In 2008, Joanne Guidoccio took advantage of early retirement and launched a second act as a writer. Her articles and book reviews have been published in newspapers, magazines, and online. When she tried her hand at fiction, she made reinvention a recurring theme in her novels and short stories. A member of Crime Writers of Canada, Sisters in Crime, and Women’s Fiction Writers Association, Joanne writes paranormal romances, cozy mysteries, and inspirational literature from her home base of Guelph, Ontario. 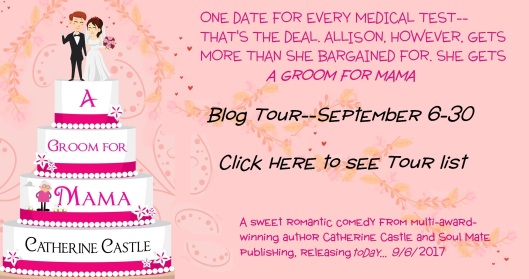 It’s day 14 of the blog tour for my sweet romantic comedy A Groom for Mama. I hope you’ve been following along for the chance to win a free copy of the book at various stops on the tour. There’s one more giveaway coming up on the tour. If you’ve missed any posts you can click on the blog tour meme at the top of this post. It will take you the page where you will find the links to all the blog posts from the tour.

Today I’m not giving away anything, but I do have an interesting post on Joanne Guidoccio’s Power of Ten blog series about Bridal Attire Superstitions.

In my romantic comedy, A Groom for Mama, the minute Mama finds a suitable man for her daughter’s groom, she begins urging the heroine, Allison, to start looking for her wedding dress. So, I thought it would be fun to discuss 10 superstitions about bridal attire. Maybe I can come up with some you’ve never heard before.