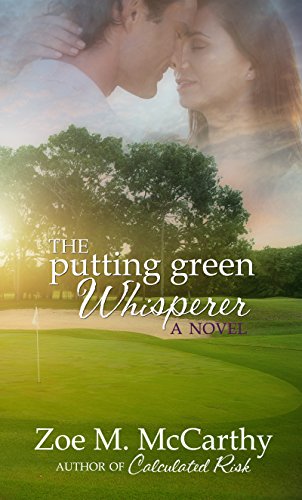 Welcome to Wednesday Writers. Today’s guest is Zoe McCarthy who will be sharing the story behind her Contemporary Christian Romance The Putting Green Whisperer. Welcome, Zoe!

The Story Behind The Putting Green Whisperer

Thanks for hosting me today, Catherine.

The Putting Green Whisperer will release September 14, 2018, but I started writing the novel in December 2012. That year, John and I joined my sister and my brother-in-law at a PGA seniors tournament at Rock Barn Country Club and Spa in Conover, NC. My sister and I sat on the fifteenth green in our fold-up chairs and watched the over-age-fifty golfers putt and then move on to the next tee. In one group, a male and a female caddy stood side by side on the edge of the green with their backs to us. The two young caddies talked quietly while their players moved about the green preparing to putt. The male caddy was tall, and the female caddy was petite with her blond ponytail protruding from her pink ball cap. My heart experienced a sappy moment, and romantic what-ifs cluttered my mind. I turned to my sister, pointed at the caddies, and said, “My next book will be about those two caddies.” It wasn’t my next book. Two other books published before The Putting Green Whisperer. And why was that?

The book still needed work. I learned two important lessons from working on The Putting Green Whisperer. Don’t allow one element of the story to overshadow a more important one. And, main characters should have flaws, but they must show inherent goodness.

In early versions, I’d worked hard to make scene settings authentic. My editor believed too much golf in the setting and action distracted from the romance between caddies Allie and Shoo. She told me Allie (then named Sissy) was intense to the point she came across as unlikeable. I’m thankful my editor pushed me during a few rewrites to find the right balance of golf setting and romance and to write an intense but sympathetic and inherently good heroine.

In the final version, Allie’s passion for what’s right (sometimes only in her eyes) makes her a strong character, and her humor and tenderness draws the reader to root for Allie to the end.

Suddenly unemployed, petite and peppery Allie Masterson returns home to Cary, North Carolina, where she caddies for her father on the PGA Seniors Tour. There, she encounters Shoo Leonard. The easygoing caddy frustrates Allie, but Shoo’s uncanny ability to read the contours of the greens and his determination to overcome a personal hand injury, fascinate Allie. She agrees to use her sport science degree to become his trainer…and then she falls for him. Shoo Leonard is grateful to Allie for her singular determination to get him ready for the PGA tour, but he isn’t ready for anything more. Still raw from a broken engagement and focused on his career, he’s content to be her fist-bumping buddy…but then he falls for her. What seems like a happily-ever-after on the horizon takes a turn when Allie decides she’s become a distraction to Shoo’s career. Is it time for her to step away or can the putting green whisperer find the right words to make her stay?

What was that all about? Shoo stared at the retreating caddy, whose blonde ponytail protruding from the back of her golf cap danced wildly as she hurried off. He craned his neck to keep her in sight as she wove through the caddies on the cart path.

Approaching him, she’d seemed like a girl on a mission. Her striking blue eyes, bright against her tanned skin, had focused on him, as if she’d rediscovered an old friend. No doubt about it, her smile had beamed at him. Then, bam! She’d done an about-face and slammed into the check-in table.

But he didn’t know her. Did he?

He mentally scanned his female acquaintances. No match surfaced. Unlikely he’d have forgotten the petite blonde.

Want to read more? Zoe’s book is available for pre-order right now and will be released 9-14-18. Click here to order your copy now.

A full-time writer and speaker, Zoe M. McCarthy writes contemporary Christian romances involving tenderness and humor. She is the author of The Invisible Woman in a Red Dress, Gift of the Magpie, and Calculated Risk. Believing opposites distract, Zoe creates heroes and heroines who learn to embrace their differences. Zoe and her husband live in the Blue Ridge Mountains of Virginia.