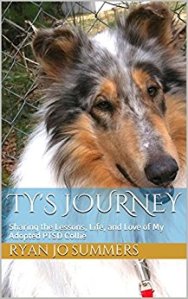 Welcome to Wednesday Writers. Today I’m taking a departure from romance to feature a non-fiction book about the journey of fellow writer Ryan Jo Summers and her rescued collie, Ty. Ryan Jo has been a frequent guest on Wednesday Writers, and I’m happy to showcase her non-fiction book Ty’s Journey. A portion of each sale of Ty’s Journey will go to the benefit of the Collie Rescue of the Carolinas. Welcome, Ryan Jo.

Blame it on the Albert Payson Terhune books I read as a child, or Knight’s “Lassie”, or the tri-color farm collie called Champ I had as a childhood chum. Whatever the original source, while I liked all dogs, collies held a special place in my heart. When I married, I briefly exhibited them professionally and tinkered with some handling to pay my entry fees and even did some 4-H judging. Soon, I preferred rescuing the collies in need over trying to create the perfect one and became director of a collie rescue group for many years. After relocating in 2004 and having my last “old pups” slowly die off, I resolved to once more have a collie.

In 2015, I applied to the Collie Rescue of the Carolinas and was approved to adopt. It took time to find the right dog for me. In March, 2015, the rescue received nine feral collies from a hoarding situation in Tennessee. I made the three-hour drive to meet them. There was one blue merle in the group (one of four normal colors of collie) and I was drawn to him. Since it was unknown if the dogs even had names, they were all given baseball-themed names and his was ‘Ty Cobb’, and he was an emotional mess!

He sat in the corner of the enclosure, with a distant look in his dull eyes. He ignored every attempt I made to be friends, which is such a un-collie behavior. Like most members of his group, he was emotionally shut down. What trauma had these sensitive creatures been put through? We could only speculate.

Being at the rescue center reminded me of all the things I’d lost in my divorce years prior. It stung like a slap to the face. I knew I’d once been able to help dogs like Ty, but now I doubted whether I could. I wasn’t the same person I was before. I almost left in tears a number of times. Finally, hours later, I still wasn’t able to leash or touch him, but I agreed to adopt him. I recognized a survivor in his detached demeanor and so was I. It was the beginning of our common ground.

It was also the start of a long journey. He knew nothing about being a normal dog. I frequently lamented about our one-step-forward-and-two-steps-back progress or celebrated our huge milestones on the rescue group’s Facebook page. Readers quickly followed our saga and suggested I write it all down. Thus the journal of Ty’s Journey began, shared on his own blog. Two years later I took the bones of the blog and the dozens of photographs and compiled them all into a full length book and published it on Amazon’s Kindle Direct Publishing. It has been a challenging ride with Ty, with high peaks and low valleys, but I would not have changed my choice in adopting him. None of the Baseball team is what would be called ‘normal collies’ but they are loved. And they are learning. And teaching their families.

Ty and Collin the cat

March, 2015, nine collies were removed from a neglectful hoarding situation in Tennessee and transported to a North Carolina breed-specific collie rescue. Collectively, they were referred to as “The Baseball Team”, and individually they were given baseball-themed names. They were untrained and many had reverted to near-feral behaviors. A blue merle male called Ty Cobb was the first one of the Baseball Team to be adopted.

His new owner recorded the first two years of their journey, chronicling the challenges, doubts, setbacks, successes, surprises, and triumphs.

Written in diary style, this is the story of one collie who went from being a hoarding victim to belonging to a family who treasured him. Along the way, as he slowly healed, he brought healing to others as well.

*A portion of each sale of this book will go to the benefit of the Collie Rescue of the Carolinas.

March 31st started like any day. And it ended with a huge step backward for poor Ty, erasing all the forward progress we’d laid in the last week. It was suddenly gone up in smoke in just a matter of moments. We headed out for our morning walk. We entered the courtyard and he froze.

There were men working on the roof of the house next door. There were trucks parked across the lawn, men shouting and shovels scraping old shingles down the roof to drop into truck beds. It was loud, scary and stimulation overload on a mammoth scale.

Ty. Freaked. Out. Oh my word, did he freak out. He could not pile himself into a small enough huddle fast enough. It was as if a thousand bombs were going off around him. If he could have dug a hole in the stone patio, he would have. Standing in stunned silence, I could see his heart beating like a runaway horse. And my heart just crumbled.

It took loads of patience and coaxing and a strong hand on his collar to lure him inside where he scrambled madly for his ‘cave of comfort’ and quivered in absolute terror. He refused all treats and even a lunchtime snack.

Heartsick at his pain and fright, I was at a total loss on how to deal with him, how to help him. His fear was palatable. What do you do when you’d rather die than face that again? Because I was sure he would have preferred death or anything over having to go back outside.

How long would it take for the roofers to complete their job and how much worse would it get for Ty before then?

Would you like to read more about Ty’s journey? You can find Ryan Jo’s book at Amazon

She lives in a hundred-year-old mountain cottage with a menagerie of adopted animals. A lifelong animal admirer, she is passionate about animal welfare, care, education, and reform. She has worked in the field of animal care and advocacy since the late 1980’s in such capacities as veterinary technician and director of breed-specific rescue. She has served as board officer, foster home, and volunteer for many non-profit groups. She also operated a professional boarding kennel and worked in a horse stable. More recently, she pet sits and dog walks.

You can connect with Ryan Jo at her Website: http://www.ryanjosummers.com/