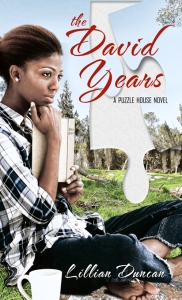 Today’s Wednesday Writers guest is Lillian Duncan. She’s talking about life changes today, hers, yours and her characters. And she has a giveaway on her website. Welcome, Lillian!

There’s an old saying—nothing in life is guaranteed but taxes and death! I think we have one other guarantee—life changes! And there’s not a whole lot we can do to stop that from happening most of the time.

But big changes aren’t just for the young. Life changes whether we want it to or not. A new marriage. A baby. A divorce. A new job. Retirement. A major illness. A death of a loved one.

Some big changes are good and some or not so good. Either way, with each big change comes a season of learning. And that’s what The David Years is all about. Learning to do the best we can in whatever situations we find ourselves.

I was diagnosed with bilateral brain tumors in 2012. They were not cancerous, but that didn’t stop them from wreaking havoc on my health and my life. I had to find my “new normal.” I not only had to learn to cope with the changes, but to learn to accept the new me. These have definitely been my David Years.

We all have our David Years—probably more than once in our lifetime—a time when we need God’s wisdom to help us adjust and thrive in the new circumstances we find ourselves—at any age.

So, whether your college years are long past or you’re experiencing them now, you’ll enjoy getting to know Nia better as she struggles to find her place in the world.

To celebrate the release of The David Years, I’m having a giveaway. I’ll pick FIVE lucky winners to receive their choice of one my ebooks from comments left on my blog about The David Years.  To be entered in that giveaway, go to http://www.lillian-duncan.com/ then leave a comment under one of THE DAVID YEARS posts. EASY-PEASY! Winners will be picked on August 30th!

Nia looked at her aunt and asked, “So what am I ‘spose to do now?”

“Have you ever heard of King David from the Bible?”

“There were a lot of years between the time David was anointed as the king and he actually became the king. It’s a time for you to grow in your relationship with God.”

“And then later I get to be king?” Nia giggled.

“I meant that figuratively not literally but these are your David Years.”

Nia Johnson has spent the past four years developing a closer relationship to God. She wants to believe she’s still anointed to become a healer at Puzzle House but as each year passes, she has more and more doubts.

Now that she’s graduated from high school and is an adult she is sure it’s time to take the mantle of healing Rachel passed to her so many years before. But the harder she tries, the more it eludes her.

EXCERPT from The David Years:

“Do you want to be a healer?” Rachel’s words echoed in Nia’s mind. The thought of helping others the way Rachel had helped her had seemed impossible until God’s presence filled the room. At the time, it had been amazing—miraculous. But now she was confused—and scared. There was no way she could do what Rachel did. She was only fifteen, how would she heal anyone?

Nia looked down, remembering the warmth, the tingling as Rachel held her hands and prayed with her. God had been in that room with them. God had given her the gift of healing. “I don’t think I can do it by myself.”

“You don’t have to do it by yourself, Nia. Rachel said puzzles are meant to be done together. That’s true for life as well. Have you ever heard of King David from the Bible?”

“That David became King David and did all sorts of amazing things for God. Anyway when David was a young boy, the prophet Samuel anointed him as the next king of Israel, but there were a lot of years between the time David was anointed as the king and he actually became the king. David was tested many times during those years. Those years were very important to David’s growth as a man so that he would be the king God wanted him to be when the time was right.”

“So what are you saying, Auntie?”

“I’m saying these are your David years, my sweet niece. It’s a time for you to learn and to grow in your relationship with God. So for now it’s time to live your life as a fifteen year old girl.”

“And then later I get to be king?” Nia giggled. “So you don’t think I need to be going out and healing anyone just yet?”

“Not yet, sweetie. It will happen when the time is right.”

Want to read more? You can find The David Years at Amazon

Lillian is a multi-published author who lives in the middle of Ohio Amish country with her husband and a menagerie of pets. After more than 30 years working as a speech pathologist for children, she believes in the power of words to transform lives, especially God’s Word.

Her goal is to write stories that entertain but also demonstrate God’s love for all of us. To learn more about her, visit http://www.lillian-duncan.com/. She also has a devotional blog at http://www.powerupwithgod.com/.