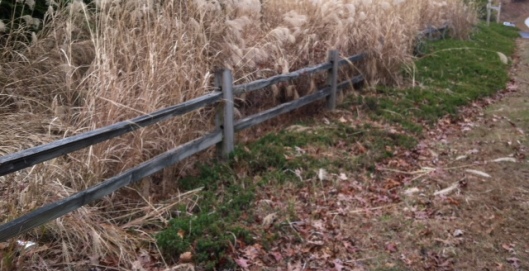 Today’s gardener writer is Ryan Jo Summers, who will be talking about Emma and George—two trees in her garden. Welcome, Ryan Jo. 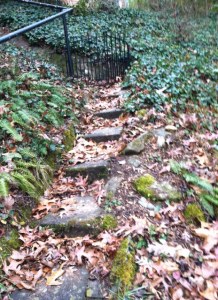 As I write this now, a gentle rain is falling. The approaching growls of thunder chased me inside from where I was planting today’s shipment: Old-fashioned Bleeding Hearts in white and pink, another rose, and a Goji berry. I got as far as the pink bleeding heart when the approaching storm sent me inside to this instead. 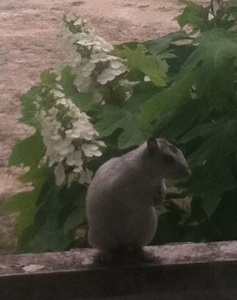 Two and a half years ago I bought my very own place here in the south. It’s a half acre, home of a 1920 cottage. I love it! There were already two flower beds installed, flanking the walkway, full of oakleaf hydrangea, forsythia, and endless daylilies. Plus a few odd bits that some I’ve yet to identify and others I’ve yet to decide whether to keep them or move them out. 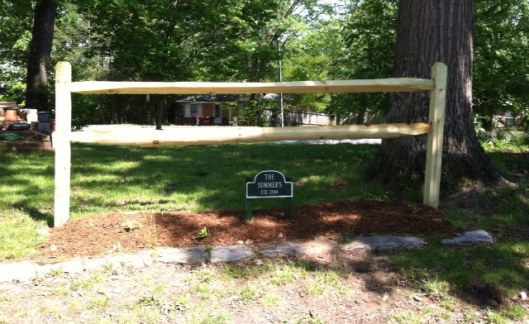 Two more beds had been established once upon a time, one held a rotten tree stump and some hostas and another forsythia bush while the other was depressingly empty. They held such promise! In the time I’ve lived here, I’ve added to both those gardens, slowly over each planting season, and added four more flower beds to the yard. (Five if you count the transplanted day lilies moved to flank the garage door).

Now, I adore fences and random steps, almost as much as I like water features. For me, rustic is the way. Since I pet sit/ dog walk part time, I see a good bit of landscaping and gardens. I like snapping photos of scenes of stairs and fences that inspire or delight me. They don’t necessarily have to go anywhere, or hold anything in or out. Just simply being in the right place, with the right look, creating the right impression is an art all to itself. Like spotting a random painting in a gallery, not anything specific or unique about it. It just has that right look. It just is. Such is a good garden scene. 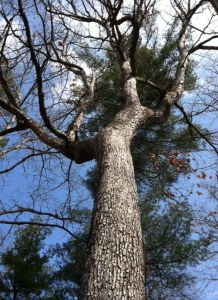 Emma — looking upward in the fall after her leaves were gone

Now, at my house are many tall, stately trees. In the courtyard in the back are two trees in particular, that have endured themselves to me in a special way. One, an oak, is right outside my kitchen window. I sense a femininity about it and call her Emma. I often ponder how old dear Emma is, for she is very tall and quite wide. Squirrels delight in racing up and down her weathered trunk. 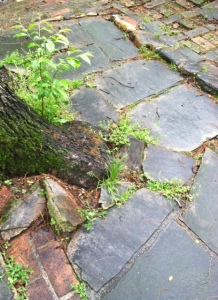 Doubtlessly, the courtyard slate stone was installed when Emma was still younger and more slender, as her roots and widening trunk have pushed the stones up and aside over the years. Poor planning on someone’s part. 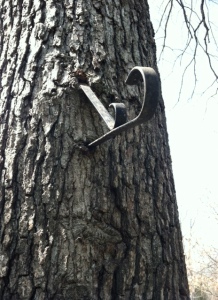 Emma and her trunk having grown around a hanging hook

There is also a hanging hook attached to Emma’s trunk, about six feet up, for hanging pots, bird feeders, wind chimes or whatever. Unfortunately, and further proof of the lack of consideration people have shown Emma over the years, her trunk has grown over the hook, sealing it like a giant scab over a wound. I wonder how that must have hurt as her trunk grew and now the hook has become a permanent part of her trunk. 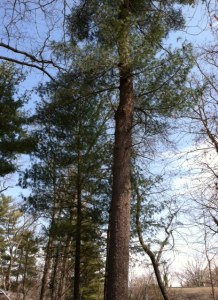 A few feet away from Emma stands George, a straight, noble-looking Pine. George is huge, both in height and circumference. He reminds me of royalty, like a king, hence his royal name. Scattered around him, at the height of roughly thirty feet or so are three of his off-spring. 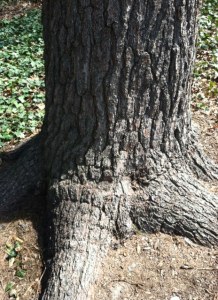 curious wrinkles at the base of George’s trunk

English ivy grows rampant around the courtyard, and encircles George’s trunk like a green robe. Diligence on my part keeps the ivy growing around George, and not up his massive trunk. Unlike Emma, George has no blemishes or human fallacies to mar his noble stature.

Considering how long Emma and George have lived, and the house they saw built, the stories of the people who lived inside, and the relaxed under their branches, I wonder what stories these two trees could tell. As I watch my newly planted flower gardens grow, I also enjoy the richness of two special trees. Once upon a time they were but small saplings, and they have grown to leave an indelible mark in this place and on me. I hope the maple seedlings, plants, and flowers I am planting now will one day leave another mark once Emma, George, and I are gone from this life.

Ryan Jo Summers is a North Carolina author who specializes in writing romances with a twist. Love stories blended with inspirational, paranormal, suspense or time travel–or several at once. She also writes non-fiction for regional periodicals. Ryan’s dad is a songwriter and his aunt wrote poetry so she claims she came by her writing skill honestly. Apparently it’s in the genes.

Her hobbies include bird-watching, houseplants (50 ish and growing), poetry and yard work. She loves to gather with friends, hike in the forest with her dog, paint ceramics and canvas and work on wiggly word find puzzles. She lives in a 1920 cottage with a menagerie of pets. Living in the mountains, she dreams of the shore and frequently uses the water as scenes for her stories.

Avianna Goodman and Sawyer Steele had been young lovers. Now she is a caterer, building her own business. Right now she needs cash to help her family. He’s being ordered to stop his wild ways and settle down to take over the family empire. His controlling mother has picked out the perfect heiress for him. Now they need the right caterer to launch the perfect engagement celebration. 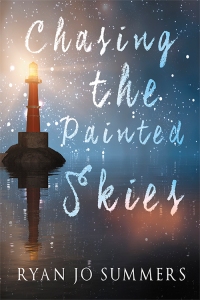 Today Ryan Jo Summers is back with Wednesday Writers sharing an excerpt from her newest release, Chasing the Painted Skies. She describes the book as part mystery, part treasure hunt, part alternative paranormal, a dash of ghost story and all romance. I have to say, Ryan, that I love the title!

So, without further delay, here’s the  blurb and an excerpt from Chasing the Painted Skies.

Raven Koynes is a woman in hiding. Years ago she escaped to remote Gull Island Light Station, nestled far away in Lake Superior. She has carved out a life of peace and solitude for herself. Until famed nature photographer Sebastian Knight arrives–in the  height of a nor’easter storm–to document the beauty of Gull Island. Unsavory treasure hunters also blow in with the storm, determined to find missing cargo from a sunken ship. And they are positive Raven knows where it’s stashed. A power outage from the storm traps everyone at her keeper’s cottage, fellow prisoners of the storm.

Between her attraction to handsome Sebastian and the unwelcome advances and threats of the hunters, Raven is pushed to her limit. Help arrives in the form of a stray German Shepherd Dog, who takes an immediate protective interest in Raven. He becomes her constant shadow and listening ear as she sorts out her growing–and conflicting–feelings for Sebastian.

Meanwhile, Sebastian came to the island looking for treasure as well, in the form of photographs. While he isn’t so sure about missing cargo, he only needs to look at Raven Koynes to know he’s found his own valuable treasure. One he hopes he can hang on to if she learns about his mysterious secret.

Now that Madeline the resident ghost has found out, it’s probably just a matter of time until Raven does too. And with the storm and power outage, no one is going anywhere any time soon.

Staring at the colorful, splintered pieces, Raven felt her shoulders sag. She’d already cleaned up so much, straightened a boatload of tossed about items and rehung the curtains they’d pulled off the wall for some reason. And she still had so much to do. The closing of the front door brought her up, swiveling, breath sharply sucked in. Who was returning?

“Hi, did you leave me any work to do?” Sebastian asked cheerfully.

She held out the dustpan, not quite sure what to do with it. “They made such a mess,” she finished lamely. What made him come back to help? She expected him to be out taking his pictures and leaving her to her own troubles. This was not his problem. “Why are you doing this?” she asked simply.

He blinked, hand pausing as he was reaching for the dustpan. “Why? Because it needs to be dumped out.”

He shifted the contents of the pan, rattling them. “Oh, you mean instead of outside taking care of my business? Right? Maybe I decided my business can have more than just one point of interest.” Walking away, he carried the dustpan to the kitchen trash can. She let out a breath and started lining books up on the shelves in the living room. Behind her, he started sweeping the floor and shaking out rugs.

“I wonder where he is?” she said about ten minutes later.

“Salzburg. He hasn’t come back yet.”

“Salzburg? Oh, is that what you’re calling your dog?” He paused as he wrestled the sofa back to where it was before. “Oops, sorry, too many questions. I’ll stop.”

Somehow his endless questions were not quite as bothersome as before. She replaced the rug that stretched along the front of the sofa, then moved to the window, looking out.

“I hope he’s okay. What if Arthur found him while they were out digging up the island?” She had seen them heading out with shovels and picks they found in the barn. A shudder ran over her. “I hate to think about what those tools in the wrong hands could do to a dog.”

“I’m sure he’s just fine and will be back soon. He sounds too smart to run off and not come back.”

She turned as his hands came to rest on her shoulders. “He got separated from his original owners and never went back,” she reminded him. “Do they mourn for their lost pet? Are they looking for him? Or had they given him up for lost?”

Sebastian reached out and gingerly stroked her cheek, setting off a series of heated explosions inside her. She trembled again, this time because of his touch.

“Your face reminds me of a rose,” he whispered low. “Heart-shaped, petal-soft skin, rosebud, kissable lips, and deep expressive eyes. You may have the temper of your namesake bird, Raven, but you are lovely as a blooming rose. You have such a good heart.”

She chaffed under his lavish praise, moving away until he captured her and brought her back. Holding both her hands in his, he rested his forehead against hers. Immediately, she liked the intimate touch. Her pulse quickened.

“I’m sorry if I embarrass you, Raven, but sometimes I can’t help but say what I am thinking or feeling.”

Heat, and something stronger, poured over Raven. It was a good thing she could not see his eyes right then as she might yield to the fire threatening to consume her. Overriding her hot passions, she struggled for composure.

Want to read more or buy the book? Click here.

Ryan Jo Summers is a North Carolina author who specializes in writing romances with a twist. Love stories blended with inspirational, paranormal, suspense or time travel–or several at once. She also writes non-fiction for regional periodicals. Ryan’s dad is a songwriter and his aunt wrote poetry so she claims she came by her writing skill honestly. Apparently it’s in the genes.

Her hobbies include bird-watching, houseplants, poetry and yard work. She loves to gather with friends, hike in the forest with her dog, paint ceramics and canvas and work on wiggly word find puzzles. She lives in a 1920 cottage with a menagerie of pets. Living in the mountains, she dreams of the shore and frequently uses the water as scenes for her stories.