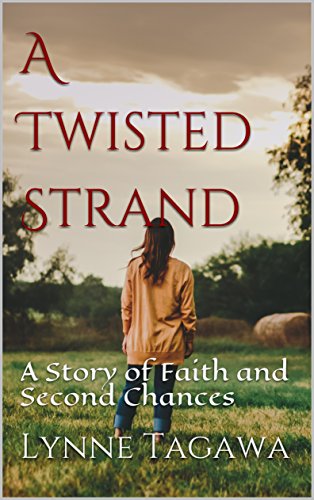 Today’s guest on Wednesday Writers is Lynne Tagawa talking about her debut A Twisted Strand, a science/medical novel with a twist of gospel and restoration. Welcome Lynne!

My debut novel began life as a question: what would happen if a genetically engineered virus were let loose in my neighborhood? Let’s say twenty miles south of San Antonio, in a field with a cow. And the virus affects the animal—but will it also affect people?

But of course, I needed people in the story, and since it’s a science kind of story, I picked a nurse who works for an epidemiologist, and her ex-husband, a gastroenterologist.

“What is Dr. Stuart again?”

“An epidemiologist.” She pronounced it slowly, eyes on the road. Gripping the steering wheel with clammy hands, she forced herself to sound calm. “I’m going to call him when we get to Uncle Don’s.”

“Epi-demi-ologist,” Jason repeated. “You told me he researches diseases, right?”

“Yes.” Rachel decided not to tell him about the Ebola symposium her boss had just attended. Don would call it “need to know.” Or was that the CIA? Don was FBI. Wouldn’t it be the same?

I’m the daughter of a nurse and a biology teacher, but I knew I was stretching it when I included the gastro doc, so I asked a doctor to look at my manuscript. Just to make sure. Here’s a scene from the ICU:

Andy was snoring, the faint rumble penetrating the plastic sheeting around the bed. Will poured a cup of coffee and thought about what he had just read online. A new treatment for Ebola. Dr. Stuart would know about it. Good grief. He felt like a soldier thrown into battle without any weapons. Could they get some of this new drug on short notice? And would it work on this engineered virus?

Out of nowhere, Rachel’s face filled his mind. Will blew into his hot coffee, trying to cool it. She was so cold toward him. Could he blame her? But now, thinking about this disease, his insides would seize up at random moments.

Rachel discovered the carcass first. Could she be infected? Will wanted to stop his thoughts, put on his professional physician’s persona and just function. But it was getting harder and harder to do.

Unlike some science/ medical stories, the real story isn’t the science, although I worked hard to make it both accurate and believable. It’s about a broken family restored by the gospel. If you read it, I hope you are blessed!

Rachel Davis owns a small homestead south of San Antonio, where she hopes to heal after her recent divorce. A nurse, she works as a research assistant for an epidemiologist in town. One day, she and the kids discover to their horror that their Jersey heifer is dead—killed by a strange virus stalking South Texas cattle. But is it a natural pathogen—or bioterrorism?

Dr. William Davis has made a terrible mistake. His brief affair has cost him his family, apart from occasional visits to his children. He does his best to be a good father, but decides he will never grovel to win back his wife. A strange disease of cattle might also affect humans. When a vet is hospitalized with symptoms, Will enters the battle.

Estranged from God and from each other, both Will and Rachel encounter the truth of the gospel and struggle to make sense of it all. The law of God seems to condemn them both. Is there hope? And is there hope for their relationship?

Lynne Tagawa is an educator, writer, and editor. Author of Sam Houston’s Republic, a history curriculum written like a novel, she is feeling her way into true fiction with the help of fellow writers. She lives in San Antonio with her husband and four sons.

A Twisted Strand will be available in August on kindle and paperback. Also, check out her website: www.lynnetagawa.com

My Tweets
Join 1,709 other followers