I inherited a community cookbook, Get Smakelijk, from my grandmother when she passed away This blue and white comb-bound book with stained cover and yellowing pages, published in 1964, includes a collection of recipes by members and friends of the Junior Welfare League of Holland, Michigan. I have no idea where she got it, because from what I knew, she was born and raised in Toledo, Ohio.

Page 52 includes a recipe for German pancakes, one of my favorite dishes from The Original Pancake House. I made these more than a few times until I calculated the caloric content when they were reserved for special occasions. On Christmas morning, 2000, the year our first child was born, they became a Hernandez family tradition.

Fast forward to the fall of 2007, when our four-year-old twins were diagnosed with celiac disease, meaning wheat flour was forever banned from our home, along with rye and barley. It was the end of German pancakes as we knew them. Over the years, I experimented with various gluten-free flours, but I could never get the recipe quite right. They turned into mounded, air-filled pancakes that flattened as soon as I took them out of the oven, instead of the bowl-shaped beauties they’re meant to be. Plus, they never tasted quite right.

Those four-year-old scrawny boys, weighing just 25 pounds each, with no muscle mass and large protruding bellies, have thrived on a gluten-free diet and are now approaching six-feet in height. They’ve been determined to figure out this gluten-free German pancake thing that they somehow remember from more than a decade ago. They finally hit the jackpot last year. As neither my husband nor I have celiac, we can taste test against the original, and if I did a blind taste test, I’d be hard-pressed to tell you which one was gluten-free. I’m pleased to share the Hernandez Twins version of the gluten-free German pancake: 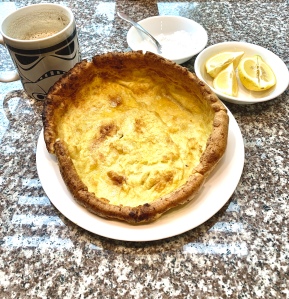 ½ stick of butter (not margarine)

Each pancake can serve two adults or one growing teen boy.

While the pancake is baking, check out 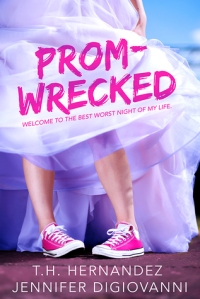 Their prom night ended in a jail cell with forty of their closest friends. But that’s hardly the worst thing that happened to them…

When the principal announces prom is canceled this year, senior Riley Hart is determined to save it. Armed with little more than her own enthusiasm, she ends up working closely with Owen Locklear, who is more than completely off-limits. Because he’s the boyfriend of her ex-BFF, Catherine Reed. Still, Owen knows Riley better than almost anyone, and his charming ideas for turning the prom upside-down and backward win Riley over.

Catherine is willing to join Owen and Riley on the prom committee, but only because her legacy as prom queen is at stake. She’s already suffocating under the weight of her parents’ expectations for after senior year, and compared to that, ensuring prom happens should be easy. At least until everything starts to go wrong.

First they lose their deposit. Then they book a band full of octogenarians. And lose their venue… Twice.

Riley will have an unforgettable teenage experience, damn it, if it’s the last thing she does… 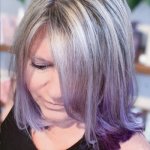 She thrives on coffee, pumpkin-flavored anything, Doctor Who marathons, Bad Lip Reading videos, and all things young adult, especially the three young adults who share her home. When not visiting the imaginary worlds inside her head, you can find her in usually sunny San Diego with her husband, three teenage spawns, a bearded dragon, a couple of cats, and Artemis, a neurotic rescue mutt.