A Beautiful Day in the Neighborhood, Catherine Castle Musings from a Writer's brain, Emotions, Mr. Rogers, Tom Hanks, What do you do with the mad you feel

What Do You Do with the Mad You Feel?
by Elliott Baker 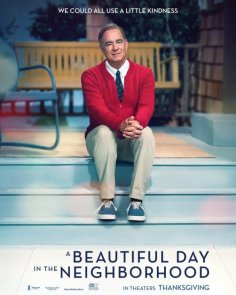 A couple of days ago, Sally and I had the pleasure of watching A Beautiful Day in the Neighborhood written by Micah Fitzerman-Blue and Noah Harpster and directed by Marielle Heller. In the movie, Tom Hanks portrays Mister Rogers. I am incapable of writing spoilers so I can’t speak about the plot of the film. Watch it. It’s different from what you think. Sally and I thoroughly enjoyed it. Fortunately, all of my generation had the privilege of watching “Mister Rogers’ Neighborhood,” if not through our own child eyes, then through those of our children.

The first broadcast of “Mister Rogers’ Neighborhood” took place on the National Educational Television network on February 19, 1968. I was already a teenager, and I remember thinking that the pace of the show was slow. I also remember thinking, “That guy can’t be for real.” Why did I think that, but perhaps more importantly, what caused me to change my mind? In 1980 I saw Mister Rogers through my son’s eyes and that image has stayed with me all my life. 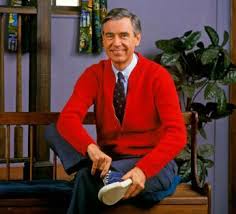 “Mister Rogers’ Neighborhood” was broadcast from February 19, 1968 to February 20, 1976, and again from August 20, 1979 to August 31, 2001. It was almost like he came back on the air for our three children. Our eldest was born in 1978. Two out of our three children watched the program and Sally and I loved the half hour we could use to do life other than children. Our daughter didn’t like The Neighborhood because she felt that Mister Rogers’ mother didn’t dress him properly if he had to change clothes every time he entered. Still, when I was home, the show would occasionally catch me and I’d sit with whichever little ones were glued to the set. My memory of those days was that Sally and I were both at a dead run juggling whatever momentous tasks that needed to be done. Why did I, a young adult, stop and watch Fred Rogers?

Most everything is new to the 2 to 5-year-olds which were the preschool ages Fred Rogers’ series was aimed at, even though it was labelled by PBS as “appropriate for all ages.” It might be said that children are unsophisticated about their choices of what to give their attention to. I don’t think that’s true, mainly because their choices followed a pattern and they often requested Mister Rogers. What they didn’t have was an unconscious experiential barrier to love, either giving or receiving. My first response to the show was “That guy can’t be real. He’s acting in order to catch an audience and maintain the success of the show in order to bring him more fame and money.” When I saw Mister Rogers through the eyes of my children and through their expressions, (I watched them watch him.) I saw the truth. Without the colors we add in through the bumps and mistakes of life, there’s just what is in front of us and we know it for what it is. The man in that sweater was exactly as my children saw him, a gentle soul teaching a child the benefits of kindness to oneself and others.

As children we lust after the power of the adults in our lives. We are hurt and the hurts scab over, but remain with us informing our lives and our search for acceptance. We learn what to do with mad from our heroes whether they’re heroic or not, whether we love them or hate them. Anger comes from fear and only from fear. We are never angry about the things we love. Anger is a signpost of an injury along the way. Acceptance leads to forgiveness which is the only true healing we can exchange. 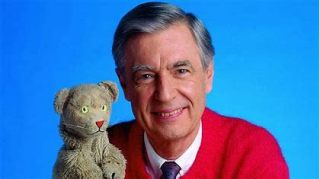 That was Fred Rogers’ gift to us. His ability to surmount appearances and portray genuine acceptance. I wonder that the ability to accept others wasn’t the first and most powerful tool that allowed us to survive in a dangerous world. The only reason homo sapiens managed to survive a vicious primitive environment was their aggregation, not their aggression. Individually, tools notwithstanding, we were helpless. Together we were more powerful than the carnivorous fauna that surrounded us, more tenacious than the environmental disasters that beset us. Being accepted by the group implied the opportunity for survival, rejection was a guarantee of death. Those early motivations are still resident within each of us like old outdated programing, and in fear, we lash out at any attempt to challenge the group that has deigned to accept us. No matter the underlying motivation of the group originator. Even if the group’s destination is eventual destruction, we can’t seem to disobey that prime directive. Belong or die.

In his gentleness, Mister Rogers taught power, real power. There is such power in forgiveness and compassion. Forgiveness causes structural change, long lasting change whereas anger and its effects are always temporary. If compassion is forgiveness for the self you see in others, doesn’t its exercise release us from our own fears at the same time? Doesn’t it make our load lighter and the road easier to navigate? We all suffer from the belief that we are powerless no matter how many missiles we command. To an adolescent, adults have power in that they can compel behavior using the threat of bodily or psychological injury. And, as adolescents, we lust after that power. We use all kinds of behaviors to compel others to accept us. That strategy which often appears to work in the short term, always fails in the end because while we may have destroyed the self we see in others, that short lived victory has not given us the ability to accept ourselves. In fact, it reinforces our nonacceptance and without that self-acceptance, the world remains in ego colors of black and white, good and bad.

Fred Rogers was a shining light dispelling the darkness of that youthful inability. He wasn’t a saint. He was from our neighborhood. That we’re having difficulty accepting ourselves now does not mean that we can never do so. We do not live in a black and white world no matter how we choose to see it. Yet we all participate in thought conventions that use that limiting paradigm. Good or bad. My father-in-law, a man very much in the mold of Fred Rogers once told me a story about a young man in Russia at the turn of the century. I’ll shorten the story, but you’ll see the thread.

A world of color is so much more exciting. The complexity of our world is frightening because our personal knowable resources are shrinking against the total knowledge available. It is this fact that threatens our survival more than any carnivorous fauna could. It is also the reason why it’s imperative that we learn to accept each other in larger groups than our current tribes. No matter how it may look, the only way to accomplish this is one at a time until eventually the one becomes all.

There are many Mister Rogers among us. They don’t speak loudly. We have to quiet our egos and listen to hear them, but they all tell us the same message. What to do with the mad you feel. Thank you, Mister Rogers, for reminding me I can do better. 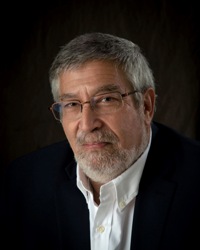 Award winning, international playwright Elliott B. Baker grew up in Jacksonville, Florida. With four musicals and one play published and done throughout the United States, New Zealand, Portugal, England, and Canada, Elliott is pleased to turn his skill to writing action adventure novels.

A member of the Authors Guild and the Dramatists Guild, Elliott lives in New Hampshire with his beautiful wife Sally Ann.

2 thoughts on “Musings from a Writer’s Brain–What Do You Do with the Mad You Feel? by Elliot Baker”