Twenty Stupid Questions I Don’t Know the Answers To 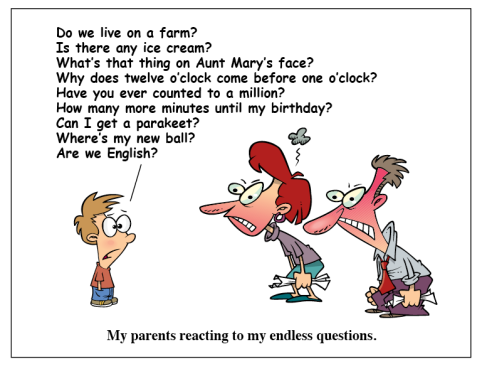 According to Wikipedia, this holiday—celebrated on the last day of September, or sometimes the last school day in September—was created by teachers in the 1980s to encourage students to ask more questions in the classroom. According to HolidayInsights.com, “at the time, there was a movement by teachers to try to get kids to ask more questions in the classroom. Kids sometimes hold back, fearing their question is stupid, and asking it will result in ridicule.”

I don’t know about you, but I’ve asked my fair share of stupid questions in my lifetime. Some so bad they’ve caused my husband to fall off the chair laughing or set everyone at the table hooting, while I sat wondering what was so funny. Unfortunately, I can’t remember them right now to regale you with.

So, instead, I thought it would be fun to list some stupid questions I found on the internet, some which made me laugh out loud. And honestly, I’d like to know the answers to them. So, if you know, leave me a comment.

And last, but not least, a stupid question I do know the answer to.

What about you? Have you ever asked a stupid question? Would you like to share it with my readers? Go, ahead. Today’s the day to do it!

While you’re celebrating Ask a Stupid Question day, why not pick up a copy of A Groom for Mama and watch mother and daughter go head-to-head in this romantic comedy with a touch of drama. There may not be any stupid questions in the book, but there are plenty of funny moments and hilarious gone-wrong dates.