Today Wednesday Writers welcomes Barbara M. Britton back to the blog. Barbara writes about women of the Bible. Today she’ll be sharing about country music, her upcoming series, and giving us a peek at her book Jerusalem Rising. Welcome, Barbara!

A God For Our Daughters

Recently, I watched the Academy of Country Music Awards and heard a new song by Little Big Town called “The Daughters.” I heard some beautiful voices, engaging words, and bad theology. How do I know what they were singing was questionable? I write Biblical fiction where I bring little-known Bible stories to light. All my books have heroines who rely on God and God shows up. So, when Little Big Town sings:

“I’ve heard of God the Son and God the Father; I’m still looking for a God for the daughters.”

My weekly Bible study recently studied the story of Hagar who fled the heavy hand of her mistress Sarah. A pregnant Hagar flees into the desert, alone and troubled. But she is not alone. An angel of Lord comes to her and gives Hagar guidance. What does Hagar name the well by which she rests? Beer Lahai Roi, for she says, “You are the God who sees me” (Genesis 16:13-14).

This October I will begin a series on the daughters of Zelophehad. Who? This wondrous story of five orphaned sisters shows how much God cares for our daughters. God gives these orphans an inheritance of their father’s land—the soon to be conquered Promised Land. Society kept women from being heirs. Because of the daughters of Zelophehad’s “big ask,” God rearranges the whole order of inheritance to include girls.

In my novel, “Jerusalem Rising,” daughters of Shallum help rebuild Jerusalem’s wall. Women construction workers were not common in Biblical times. Imagine my surprise to read Nehemiah 3:12 where the builders of the wall are listed for everyone to read. Shallum repaired the next section with “the help of his daughters.” Shallum’s daughters repaired their city wall and faced opposition from neighboring rulers. How brave!

We do have a God for the daughters. Jesus first appeared to women after rising from the dead. In Matthew 28 1-10, we see the angel of the Lord appearing to Mary Magdalene and the other Mary (wife of Clopas) and telling them to notify the disciples that Jesus had risen. Wahoo! Who did the women meet as they hurried away? Our risen Lord, Jesus.

While I like Little Big Town’s sentiment that girls should be respected and encouraged to do great things, our God has been doing that for centuries. We do have a God for our daughters, and for our sons, and for everyone. 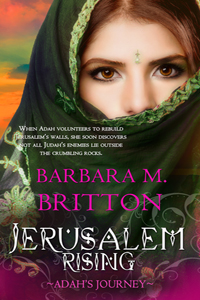 When Adah bat Shallum finds the governor of Judah weeping over the crumbling wall of Jerusalem, she learns the reason for Nehemiah’s unexpected visit—God has called him to rebuild the wall around the City of David.

Nehemiah challenges the men of Jerusalem to labor on the wall and in return, the names of their fathers will be written in the annals for future generations to cherish. But Adah has one sister and no brothers. Should her father who rules a half-district of Jerusalem be forgotten forever?

Adah bravely vows to rebuild her city’s wall, though she soon discovers that Jerusalem not only has enemies outside of the city, but also within. Can Adah, her sister, and the men they love, honor God’s call? Or will their mission be crushed by the same rocks they hope to raise.

“Wait, sister.” Adah’s words came out in a rush. “Shouldn’t our father and the household of Shallum be in the governor’s record? What of our children? Will they not want to see the names of their ancestors and know we were faithful to God’s call?”

Her mother tensed. “Your father has no heir.”

Judith’s eyes narrowed. A scowl puckered her lips. “No one without sons is going forward. What woman would agree to labor with stone?”

A tide pool swirled inside of Adah’s belly. Try as she might to remain calm, her ire flared at her family. “Our father, a ruler of this city, sits on a stool hidden by a scribe who will not even ink his name on the parchment. Did Nehemiah not address the daughters of Jacob? Do we not have the strength to pick up a stone?”

Her mother patted Adah’s arm. “What makes you think we can do this? We are not craftsmen and we have our own burdens. It is time to lead me home and let the men of this city discuss the labor.”

Adah clasped her mother’s comforting hand and removed its hold on her body. “You have a daughter to take you home. I intend to restore a section of the wall. God has been deaf to my prayers but perhaps with the governor praying beside me, he will give me the wherewithal to move rock.”

Her words were terser than she meant them to be, but they were true and their truth had been bound in her soul for over a year. She pushed through the herd of people trudging forward to heed Nehemiah’s call.

Barbara M. Britton lives in Brookfield, Wisconsin and loves the snow—when it accumulates under three inches. She writes Christian Fiction for teens and adults. Barb kicked off her Tribes of Israel series in 2016 bringing little-known Bible characters to light. In October of 2019, she will begin a series on the brave, groundbreaking daughters of Zelophehad. Barb is a member of the American Christian Fiction Writers, the Society of Children’s Book Writers and Illustrators, Romance Writers of America and Wisconsin Romance Writers of America. She is published with Harbourlight Books, an imprint of Pelican Book Group. Barb has a nutrition degree from Baylor University but loves to dip healthy strawberries in chocolate. Find out more about Barb’s books at http://www.barbarambritton.com.

“Jerusalem Rising” has been on sale on Amazon of late and is free on Kindle Unlimited.