Welcome to A Writer’s Garden where writers who are gardeners or just love gardens will be sharing their garden and flower stories, as well as a bit about their writing gardens—aka their books.

Today’s guest is author Kathy Bryson and she has a garden mystery to share. Welcome, Kathy!

The Mystery of the Broken Birdbaths 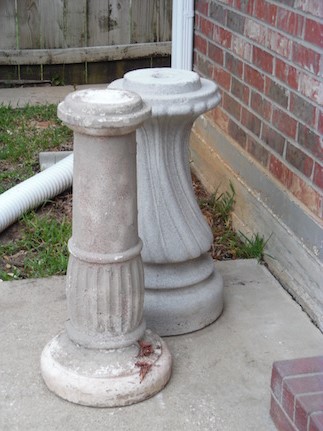 Last year, I moved from Florida to Texas, giving up my garden for a new job and a cozy townhome in the Piney Woods. By the end of my first semester, I knew I’d make a mistake. Those stairs were killing me!

So after much house-hunting, I settled into a single story patio home and immediately returned to gardening. There’s just something about being able to dig in the dirt, even if it is with the excuse of ‘settling in.’ But one thing puzzled me. Who owned this house and why did she have so many broken birdbaths?

I know the owner was a woman and she had very nice taste. She had a lovely home, all cream carpets and walls, and she left behind a closet of high-end clothes from Dillard’s that the mother of a friend immediately claimed for church. She also left a number of landscapes on the walls and a shelf full of biographies, including ones on Hillary Clinton and Ann Richards. I imagine that she was an older woman with a love of travel, well-educated and refined, but the garden tells another tale.

The flower beds, both front and back, are lush with Mondo grass borders. This is a nicely contained decorative grass that isn’t an aggressive spreader and in the front, even manages to keep the St. Augustine grass at bay. But in the back, someone also added Monrovia or maiden grass that spread everywhere! Fortunately it comes up easily because I will be weeding it till kingdom come.

The grass had a lot to grow in which leads me to believe that the former owner was not a hands-on gardener. Mulch is piled 4 inches high on top of earth mounded to the top of the beds. A couple of bags were left lying unopened under some eucalyptus bushes that were starting to crowd the gutters. The myrtle trees were ringed with foot-high sprouts, and the flower beds to the side of the house have rocks on top of mulch on top of sand. Whoever worked that patio just followed directions.

There was also a profusion of broken bird baths – four of them, two without basins. And an abundance of statuary – painted rocks, owls, rabbits, St. Francis, a couple of tikis, and a stone garden bench – all different styles and none of them matching the elegant interior of the house. 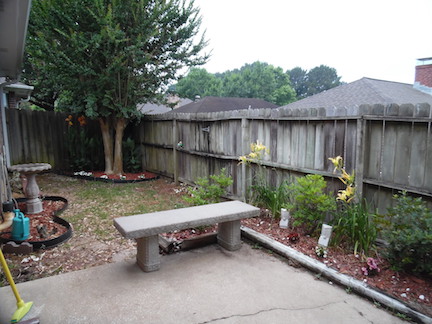 Where did all this junk come from? Why would a lady of apparently cosmopolitan taste have such a mishmash of concrete? Did she have a secret liking for kitsch? Did she moonlight for the Mafia? Or is my imagination just running away with me again?

A coworker suggested that the birdbaths were probably gifts that multiplied after the lady happened to mention she’d like one. One basin became a gift to a student who used it to hold succulents at his wedding; another I kept. The rest are headed to Habitat for Humanity along with the bench. But as it turns out, one reason those bushes might not have been trimmed is there are cardinals nesting in them.

If anything, I’ll need to fill in the bare spots in the gardens. Can’t wait!

When not speculating wildly about her neighbors, Kathy Bryson runs a college writing center in East Texas. She’d like to say she’s climbed tall mountains, rappelled off cliffs, and saved small children, but actually she tends to curl up and read, is a life-long advocate of Ben & Jerry’s, and caters to 2 spoiled cats.  She can claim several awards for a series of leprechaun romances and to have saved a few term papers.

You can find Kathy online at https://kathybrysonbooks.com/ and her books on Amazon at https://www.amazon.com/Kathy-Bryson/e/B00DHIJ922/