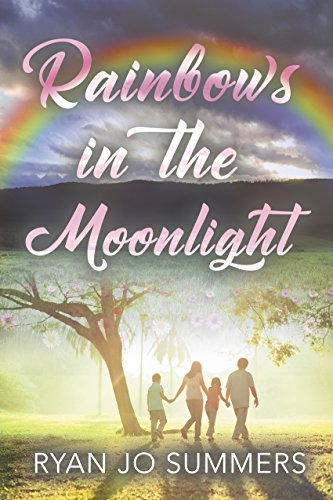 Today, Ryan Jo Summers is back on Wednesday Writers. This animal lover has an interesting tidbit to share about her book, Rainbows in the Moonlight, that had me smiling. I have to tell you, Ryan Jo, I love this title! Welcome to the blog!

Unlike most of my books, “Rainbows in the Moonlight” did not start as inspiration from a photo or from a chance observation or conversation. In fact, I really don’t recall how the story line came to me. It just happened of its own accord. Almost immediately I felt a connection to Koda and Dalton.

Another unusual fact about this story is I seldom write stories involving children. Just a personal comfort level of mine, I suppose. It’s easier to focus on the relationship developing between the hero & heroine without kids needing their page-time too. However, Koda’s young children, Ruthie and Terry, quickly became an integral part of the story. In fact, the charm of the story could not have happened without Ruthie and Terry.

What did surprise me was how instantly four-year-old Ruthie took over the pages. She was not supposed to be so gregarious and outgoing, but she most certainly is! There was no stopping Ruthie once she got going across the keyboard. Older brother Terry had no choice but to accept a quieter role in his baby sister’s shadow.

One more thing about “Rainbows in the Moonlight”: every single character is named for a dog I used to know. Many years ago I was active in the doggie world and was fortunate enough to know many wonderful pooches. Some of them are now have their name immortalized in the pages of this book.

The original Koda was an English Setter hunting dog. Dalton was a collie mix. Ruthie was a sheltie mix and Terry was an Australian Shepherd puppy. Dalton’s parents in the story; Cal and Judy, were really older tri-color collies. The only three characters not named for dogs are Candi (the bad girl of the story) and Koda’s co-workers Amy and Norm.

Rainbows in the Moonlight

Fresh from prison, Dalton Clayton needs a job—and just about anything will do.

Divine Intervention steps in and tosses Koda and Dalton together. Koda struggles with the conflicts of her impulsive decision to leave her babies with an unknown, convicted felon. That just can’t be wise, can it? But she can’t help but see how quickly the children bonded to him and trust him. Or the reassuring sense that this is just right.

Meanwhile, Dalton stumbles through the spills and thrills of two young children, and his growing interest in their mother. A chance meeting brings him back to his estranged family as well.

Over time mutual attraction forms between Koda and Dalton as the bond between Dalton and the children deepens. A sweet, southern romance full of forgiveness, second chances, and fun kids.

Ryan Jo Summers is a North Carolina writer who likes to pen romances with a twist. Love stories blended as inspirational, with paranormal, suspense or time travel–or several at once. She also writes non-fiction for regional periodicals. Her dad is a songwriter and his aunt wrote poetry, so Ryan came by the writing gene honestly.

Her hobbies include poetry, bird watching, houseplants and gardening, gathering with friends, hiking in the forest, painting canvas and ceramics, and working wiggly word find puzzles, mah johngg or chess.  She lives in a 1920 cottage with a menagerie of pets. She often daydreams of the shore and frequently uses water as settings in her stories.