The Zen of Mulch 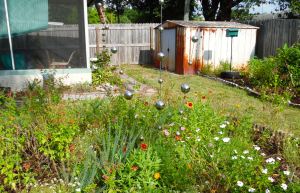 My ambition when I started gardening was Thomas Kincaid. I wanted to grow the same lush, overflowing flowerbeds featured in his paintings. That ambition lasted a few years while I worked to enrich Florida’s sandy soil and get anything growing. But then my efforts started to pay off and I quickly lost control of my garden to the summer rains and St. Augustine grass run amuck!

The last 2 years have led me to the conclusion that perhaps Kincaid wasn’t so much a gardener as a painter, but what really changed my mind was a recent visit to Arizona. I expected to see desert, I was told the place was brown, but what I found was pebbled landscapes dotted with acacia trees like green lollipops on display.

At first, I didn’t know where to look. The brown landscape seems empty, but it’s not uniform like the lush, green backdrop that is Florida. My eyes skipped, looking for something to land on. But after a while, I noticed the trees more and, in particular, the odd flowering bush or cactus planted nearby, and that’s when I realized that the Arizona landscape is essentially a Zen garden.

Now I don’t know if that’s what the Department of Transportation intended, but I found the landscaping around Phoenix very calming, almost peaceful. The traditional Zen garden was developed in 15th and 16th century Japanese Buddhist monasteries to stimulate meditation. They were meant to be abstract representations of the essential essence of nature. There’s debate on whether they’re meant to represent the principal of Zen or whether they were meant as a form of art, but either way, they’re very restful. 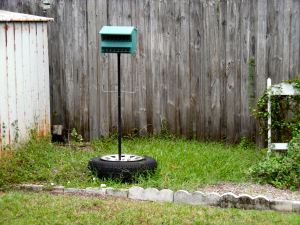 having a bad week to work out all my frustrations. I did put out melaleuca mulch last year to reclaim the back bed from the St. Augustine grass, but I fully intended to replant that bed after it rested. Now I’m thinking I may not. The central flowerbed is wildflowers, the side beds are herbs, maybe the back bed should be a rock garden. After all, balance is an important part of Zen too!

Kathy Bryson is an award-winning author of multiple leprechaun love stories. An avid fantasy fan as well as romance lover, she’s exploring new territory in series of YA/NA novellas. The Med School Series looks at B-movie monsters in today’s world and is inspired by her co-workers – really! The 1st installment, Giovanni Goes To Med School, is self-published on: Amazon –iBooks – Barnes & Noble –Kobo –

You don’t have to be a medical student to know the dead do not get up and walk around. Anyone who’s buried a pet in the backyard knows the dead don’t walk. They don’t even lurch.

The night-shift in the morgue was supposed to be a chance to study in quiet and off-set ridiculous student loans. Giovanni is stunned when his patient sits up and starts scolding. Now he’s got to convince an unbelieving medical community to take action, so he can get back to learning about the dead – not the undead!

4 thoughts on “Through A Writer’s Garden with Kathy Bryson”