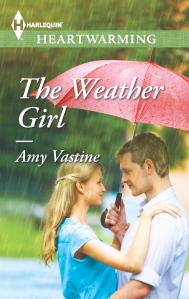 Today I’m welcoming Amy Vastine to Wednesday Writers. Amy’s sweet romance book The Weather Girl has been described as heart-warming and funny with a swoony, sexy hero. I’m looking forward to reading this one. She’s going to be talking about weather today, which fits perfectly with her book. She has some phenomenal photos to share and a free e-book for a lucky commenter. Please leave your email address along with your comment so we can get in touch with you if your name is chosen.

And now I’ll hand it over to Amy.  Welcome, Amy!

First, I’d like to thank Catherine for having me on her blog today! She has been very patient with me and it is so kind of her to let me talk about my book, The Weather Girl. The story is part of the Harlequin Heartwarming line, which means if you are looking for some shades of gray, you’re looking in the wrong place. The senior editor of Heartwarming has dubbed it the “fifty shades of sweet”line. Clean, wholesome, yet deeply emotional reads.

The Weather Girl is about Summer Raines, a Texan meteorologist who has to deal with the new addition to the station team, former football star Travis Lockwood. Everyone loves him except for Summer. She loves the weather, and it was while I was developing her as a character that I learned to love a few things about the weather.

The story is also about finding love in unexpected places, and I think Mother Nature also gives us lots to love where we least expect to find it. For example, my research taught me quite a bit about clouds. I know there doesn’t seem to be much to learn about them but not all clouds are the same. One of the first pictures I came across was of a sky punch 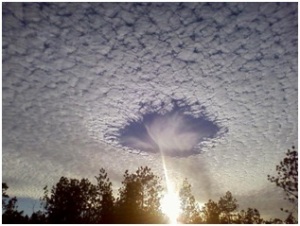 I thought it was so cool that sent me down the rabbit hole to find other interesting cloud formations. I came up with the sky wave (which is my favorite!)

Altocumulus lenticularis clouds, which are sometimes mistaken for UFOs … 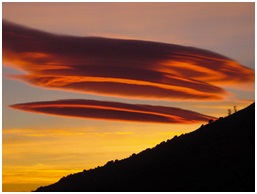 And last but not least – these clouds would be my husband’s favorite. They are called mammatus clouds, which is basically a fancy way to say “Booby Clouds”. Meteorologists say they form only when the storm is clearing up. So don’t be scared when you see boobs in the sky, the storm has passed! 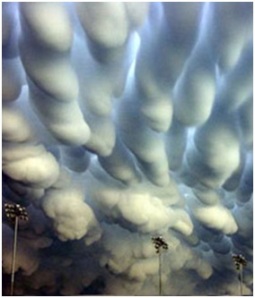 Even clouds are misunderstood like Summer is in my story. Everyone sees her as a crazy weather freak. Until Travis Lockwood comes to town. He sees Summer Raines as an intelligent, fearless, and beautiful woman. He falls for her and her passion for the weather.

I guess I did, too! I have a sign at my house that says, “To find a rainbow, you must weather the storm”. Love stories are all about characters pushing through the rough times to get to the good stuff in the end. The Weather Girl is full of storms, emotional and meteorological. I hope you’ll check it out!

What’s your favorite weather phenomena? I’ve got a free e-book of The Weather Girl for a randomly selected commenter who shares Summer’s love of a good storm! Thanks for stopping by!!

TURBULENCE IS IN THEIR FORECAST

Summer Raines knows when it’s going to rain. She can just feel it. That’s why the local weather girl’s so good at her job. Too bad she couldn’t have foreseen the tumultuous arrival of Travis Lockwood, everybody’s favorite star NFL quarterback. Make that former star NFL quarterback. Sidelined back to Texas after an injury forced him out of his career, now the golden boy—shouldn’t he be humbled by his adversity, even a little?—is trying to steal her precious on-air time. Summer is reduced to reporting on the weather from…football games. It’s enough to make her quit and follow her dream of becoming a storm-chaser like her parents. Except she’s got to stay put; her grandparents need her. She’s stuck with a career that’s going nowhere and a man who delights in her refusal to be charmed. Falling in love isn’t nearly as easy as predicting the weather.
Excerpt:

Her annoyance at that nickname was obvious. Her naturally pink cheeks flushed red and made him smile. She hated him and he loved it.

“Mr. Lockwood, good to see you were able to dry off after last night,” she quipped.

Travis’s laugh was deep. How he’d missed laughing for real and not for show. “I plan on telling Ken it’s entirely your fault if I catch a cold.”

“I don’t control the weather, I just predict it.” She turned her attention back to her monitor. Her soft-looking curls fell down like a curtain, shielding her face from him. He wanted to reach out and push them behind her ear so he could see those cheeks, those eyes. Her eyes really were amazing. They were big and blue like the Texas sky.

He sat on the edge of her desk. She flipped her hair off her shoulder and side-eyed him, saying nothing. He picked up the framed photo of a young couple and a curly-haired, little girl in front of something that looked like a souped-up tank. She snatched it out of his hands and set it back in its place. “Is there something you need? Maybe you’re looking to unload thirty seconds from your segment? Or are you just here to bother me?”

“I was the special guest at the Abilene Rotary Club’s luncheon today. They think you have magic powers. Said you’ve never been wrong about when it’s going to rain.” He left out the part where they wondered if she was a witch.

“No magic powers,” she said, trying to look disinterested.

“That’s what I said. I told them it was nothing but luck, and odds were you’d get it wrong one of these days.”

Summer stopped what she was doing and turned her whole body in his direction.   “Did you, now?”

Finally, he had her full attention. He smiled. Most ladies loved the dimples, but they only seemed to fuel Summer’s fire. “I mean, if it’s not magic, what else could it be?”

“You were a football player before this, correct?”  He liked how she had to ask, as if she wasn’t completely sure.

“Does that not require any intuition at all? Or do you just learn how to play and that’s it? Anybody with any athletic ability can do it?”  Again, she made him laugh.

“Anyone can play. But to be good, you need to read more than a playbook.”

“Exactly,” she said with a smile and a wave of her hand. “I read more than the radar. I can’t explain how it works, I just feel it. I’m sure there are things you can’t teach someone about football. They just know it or they don’t.”

“Well, that’s probably true. My mom swears I was born wearing a helmet. I probably know more about football than I want to.” That was the truth. He had slept, eaten, drunk and breathed football his entire life. “Anytime you want to learn something about the game, I’d be happy to teach you.”

She froze, her pretty pink lips parted. He’d hit the nerve he was looking for. Football held about as much of her interest as watching paint dry held his. She turned forward and shook her head. “I don’t want to learn about football.”

“Maybe you could teach me about predicting the rain, then?” Travis knew all about defensive strategy. She could block his pass all afternoon, but he wasn’t going to stop trying for that touchdown.

She shook her head again. “You don’t want to hear about weather forecasting.”

“You’re leaving me no choice,” he warned. “I’m gonna have to tell everyone at the Rotary Club it’s magic.”

Look for Amy’s book The Weather Girl at:

Believer in the Happy Ever After

Amy Vastine has been plotting stories in her head for as long as she can remember. An eternal optimist, she studied social work, hoping to teach others how to find their silver lining. Now, she enjoys creating happily ever afters for all to read. Amy lives outside Chicago with her high school sweetheart-turned-husband, three fun-loving children, and their sweet but mischievous puppy dog.